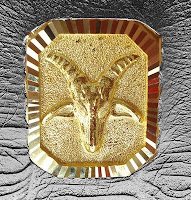 This is an order direct from factory. The work I have done is just the surface of the ring i.e. goat head plus frame. Than the wax sifu will choose a suitable ring base for the plate to attach on. The customer give a rough sketch drawing on the goat head design. I do some research on the net and found a goat clip art that suit the design most. I use rail to do all the relief and make some adjustment on the control vertical point to have this effect. Now the same customer is asking for a sculpture goat head ring and we are still looking for a suitable sculpture in the market for scanning.
Posted by Jane at 6:57 PM 0 comments 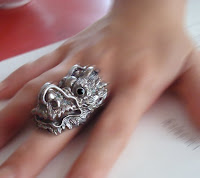 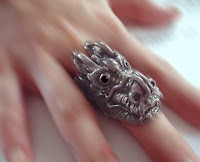 This ring is custom made by one of my Indian young metal smith who actually made and solder the silver scales piece by piece. I really admire his passion and patient towards metalworking. 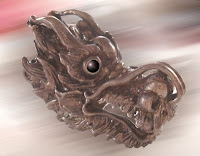 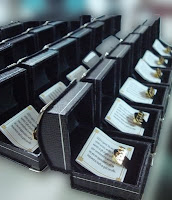 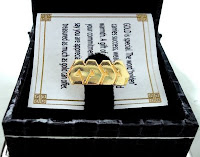 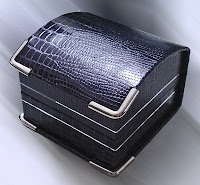 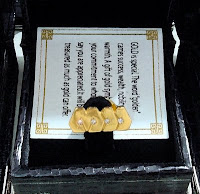 This is a repeat order . I am satisfy with this project cause with more experience and new techniques, we manage to provide better quality with lower price products. The first batch does not meet my expectation cause I have used modeling wax the as a mold and the outcome was not as good as I am now using i.e. modeling board. The benefit of utilizing modeling boards is short cut the rubber mold part which I could actually inject direct into the modeling board to create as much copies as I wish. The thickness and surface of the pendents are more consistent. Besides, I do not have to worry about the casting failure which I have to crave the wax all over again. We have chosen the color of the packaging from red to black which also match gold the most. Products description: Average 916 gold weight 1.76g, with butterfly pin, black color jewelry box and a certificate notes. Cost per box: RM 240.00
Posted by Jane at 6:46 PM 0 comments

What is so great about JewelCad? 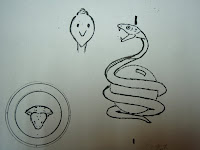 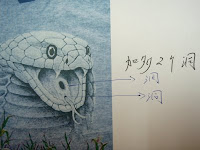 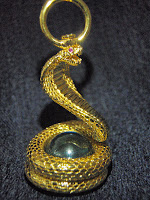 Why JewelCad? I have meet a few local Jewelry Designers who use JewelCad as their designing tools and most of them give positive respond. Initially, I disagree with them. The JewelCad user interface display present complicated lines and wires frame which make me really headache. However, once I have get use to it then miracle of the software starts to review. JewelCad works as intuitive as pen in my hand. I really admire its UV Mapping and Project Mapping function which I can do wonders with them. They also works very well on applying patterns and textures on designs. Not to forget its control point(CV) editing function which is a powerful tool for inorganic or abstract structure. In fact, JewelCad was exclusively design to serves jewelry designer in order to minimize communication break down with customers. I have the experience of drafting a snake sculpture pendant which took me a month to communicate with client via email and phone. We will never make into conclusion without JewelCad photo rendering function. If I am not mistaken, I have summited at least five copies of drawing before he agreed. You never know how its feel when he finally nod his head. Should I said like the baby head coming out during delivery...
To know more about JewelCad....
Posted by Jane at 4:08 PM 0 comments 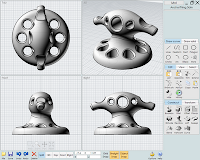 I take up MOI (Moment of Inspiration)as a starting point towards the world of CAD 3 years ago. The clean and simple user interface of MOI (pronounce "moo-eye" sounds like mother's love in Chinese) short-cut my CAD learning path. I really enjoy creating something 3D in just a few simple steps. I manage do simple name or pattern engraving which sent direct to .stl file for machining. It was a fun experience because directing a machine to work according to your way with excellent precision and 100% perfect outcome is just like a dream come true. The picture on the left is MOI unique logo. I really admire Michael Gibson the founder/programmer of the software who actually spend 4 years to program MOI all on his own cost and he did an excellent job. I gained a lot form his forum especially the knowledge of CAD. He is the CAD expert that teach in a simple way. I think this is the main criteria to become a good teacher/tutor/coach. He is also the programmer of Rhinoceros CAD which is the top selling NURBS CAD. I really admire his passion on CAD.
Posted by Jane at 7:39 PM 0 comments 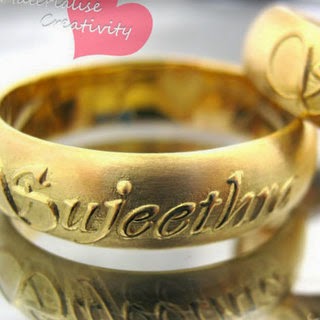 let your message be timeless

This blog is to create awareness among Malaysian that with the same among of budget you can have higher bargaining power to ask for unique and personalized piece of jewelry or may I say "The One and Only Art"?